Brian McLanahan is staying at the keepers house this week and will be repairing the chimneys.  The chimneys are in great need of repair and the leaking flashing has been the cause of much of the water damage in the house.  It will be great to have them functional again and the two stoves moved out to the house.

While waiting for the Rotary Festival fireworks tonight, we could see the lights on in the house.
Posted by LDM at 11:44 PM No comments: 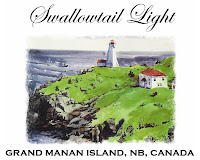 If you haven't been to Swallowtail lately, there are some new additions.  We have two summer students, Geoffrey Hadaway and Robyn Guptill.  They are keeping the building at the top of the hill open daily, the former boat house from the decommissioned Ross Island light house, Fish Fluke Point.  They are greeting visitors and selling a few items to help raise funds to maintain the property, pay the utilities, etc. 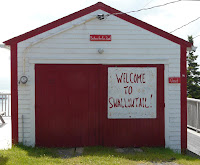 The t-shirts have the same design as the very popular cotton tote bags sold last year for the 150th anniversary.  They are available in four adult sizes and several children's sizes.  There are also matted photographs, notecards, postcards, bookmarks, jars of beach treasures and some used books for sale.

We also have two picnic tables loaned to us from the Anchorage Provincial Park.  One is on the deck and the other is near the stairs.  We do have water for sale and you can bring your picnic lunch and enjoy the view.

July 7, 2011, saw another gathering of those keenly interested in the Swallowtail Lighstation.  The flag was raised for the first time this year with an RCMP officer in attendance as O Canada was sung.  A plaque was also unveiled to commemorate the sacrifice of Elodie Ingalls Foster in her role as a lightkeeper in 1936.  Family members were in attendance to unveil the plaque that was later installed on the lighthouse where a terrible accident resulted in her clothes catching fire in the evening of August 7.  Despite medical care, she died the next day.


Text on the plaque reads:
In Memory Of
Elodie Ingalls Foster
19 February 1892 - 8 August 1936
In the early evening of August 7, 1936, Elodie Ingalls Foster in her capacity as second keeper at Swallowtail attempted to light the lamp in the lighthouse tower. She had carried out these duties previously and for unknown reasons the flammable liquid used soon engulfed her in flames. She was able to get out of the tower and reached the living quarters of Swallowtail. She was quickly found by family members and medical attention was called. Despite their best efforts Mrs. Foster died from her injuries the following day.
The death notice in 1936 read:

ALONE AT TIME OF ACCIDENT

North Head, Aug. 10 – (Special) – Death came to Mrs. Thomas Foster late Saturday afternoon as the result of severe burns received while lighting the lamp at the Swallow Tail Lighthouse here. Friday evening directly following the accident it had been hoped and believed that she might survive but as the hours passed medical advice saw that the end was only a matter of a short time.

As second keeper of the light and alone at the time with the exception of her three-year-old granddaughter, Wilhelmina Knyff, Mrs. Foster had taken her young company to the light tower. She adjusted the lamp parts and applied wood alcohol with a torch and somehow, not thoroughly understood, the second application spilled the inflammable liquid which quickly spread, catching her clothing. In a moment she was a mass of flames and tearing at her clothes to rid her body of the fire, raced down the long winding flights of stairs to the living quarters of the light.

The terrified little girl left in the light started from the tower which was now afire and fell down the deep stairs. She was injured slightly about the head.

Just at that time Mrs. Foster’s two daughters, Miss Ruth and Mrs. Eddy Knyff, her son, Leonard, and Junior Ingersoll, a companion, rushed in. Horror stricken with what they found Len had presence of mind enough to immediately seek medical attention and his father at Southern Head Light, and to extinguish the fire in the tower.

Suffering intense pain, Mrs. Foster was conscious at times, relating as nearly as could be, what had happened. A greater part of her body had been seared by flames and on through the night and during Saturday her condition changed but little with the exception of a general weakening. Just a few hours before “lighting time” the end came.

Mrs. Foster was born at Ingalls’ Head, the daughter of the late Capt. and Mrs. Loran Ingalls and when her husband took over the appointment as keeper at the Southern Head Light, entered zealously into the work with him. She was considered as able and efficient second keeper in her own right and when changes in appointments came and they transferred to Swallow Tail she was made assistant keeper until Mr. Foster would be enabled to leave the light at Southern Head when that would be taken over by his successor. Their son, Leonard, has been acting as keeper at Swallow Tail.

The suddenness and painful conditions of her demise came as a shock to the entire island, to her family and immediate friends. She leaves to mourn her husband, Thomas H. Foster, one son, Leonard, two daughters, Ruth, at home, and Mrs. Eddy Knyff of Eastport, one brother, Paige Ingalls, of Black’s Harbour and Ingalls’ Head.
Posted by LDM at 11:31 PM 1 comment:

When the keepers house at Swallowtail was leased as a bed and breakfast, a wonderful cedar deck was added on the southern side with access from the house through two patio doors.  The deck was only accessible from the western side and while some people did walk up on the deck, to get to the lighthouse it was necessary to walk back around the northern side of the house.

This winter while restoration work was being carried out at the keepers house and boat house, the deck railing on the eastern side was knocked over by the wind during one of our northeast gales.  Although the railing was stood back up again and secured, the next gale took the railing and shook it so violently that all the pickets and rails were taken apart and flung onto the ground.

﻿﻿ ﻿﻿ Because the ground was frozen we had to wait until the spring to build the extension.  We also needed to make it strong enough to withstand the ferocious winds so it didn't get stood on end as the old boards walks were after an October hurricane in 1963.  We skirted the side facing the north to reduce the amount of wind that could be forced under and the deck, hopefully reducing the amount of uplift and keeping the deck in place.  We incorporated a bench instead of a railing so people could enjoy the views.  Because of a rock outcropping, the deck had to narrow as it extended to the east.  To match the observation deck, the deck was sculpted around the rock.

I have always admired the wooden lobster trap style benches at the Anchorage Provincial Campground.  With funding from the Canadian Heritage Legacy Fund for ground work related to a tribute to the former light keepers, we were able to have six installed at Swallowtail.


We were able to borrow the pattern from the Anchorage and purchased the lumber to make the benches.  Some of our volunteers cut out all the components which were then carried out and built on site.  They are very heavy, which is ideal for the windy conditions at Swallowtail, but it also makes it a bigger challenge to  put them in place if they are fully constructed.

I am not the only one who loves these benches and there have been several people ask to have one made for their own gardens.


We also have a great older bench that was donated and refurbished in the red lighthouse paint colour. This bench was owned by the former owners of the Anchorage Provincial Park, the L'Aventures. It is on the observation deck surrounding the greeting centre and is accompanied with a picnic table on loan from the Anchorage.
Posted by LDM at 12:46 PM 1 comment:

Swallowtail is a beautiful location but getting things to and from the keepers house or lighthouse is always a challenge even when the tram way was functional and things were brought by boat.

A couple of weeks ago we needed to move some heavy items out to the keepers house from the former Ross Island boathouse because that is now our greeting centre and gift shop.  We had organized some of our volunteers to help but many of us are getting up in age although are still very active and always up to a challenge.

It just so happened that the Hampton Sea Cadets were visiting the island to go whale watching and arrived just in time to carry some items down the 54 steps across the bridge and along the trail.  Thank you!


And just to remember the light keepers motto at Swallowtail - never go empty handed, they graciously carried some items back up the steps!

The gift shop/information centre is starting to look great, thanks to many people who have been involved hiring students, organizing schedules, ordering stock and painting signs.  We have two picnic tables on loan from the Anchorage Provincial Park for the summer.