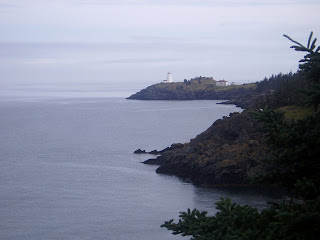 This image was submitted by Deborah Upton who is re-establishing roots on the Grand Manan and will have the reverse view of Swallowtail (southern side) from her new house on Net Point. This view is from Hole-in-the-Wall Park on the northern side of Swallowtail. She took this last summer.
It isn't difficult to see why this point of land had inspired so many and why so many people are passionate about it. As lighthouses have been destaffed and automated, most of the associated lightkeeper buildings have been removed or torn down. To be able to keep all of the buildings on Swallowtail intact is a challenge and also a wonderful opportunity to preserve a way of life that is disappearing very quickly but represents an important part of maritime history.
The view of Swallowtail is a bit different today with -12 C air temperature and strong northwest wind driving sea smoke or vapour up and over the lightkeepers house from the Sawpit. Sea smoke forms in the winter when the air temperature is significantly lower than the water temperature. It swirls and dances on the surface of the water and if cold enough, can be incredibly dense and forming banks of clouds. Around Grand Manan, the ocean does not freeze because of the strong tidal action keeping ice pans broken up and mixing warmer bottom water with surface water, although ice pans do form in sheltered areas where there is fresh water input and prolonged periods of cold weather.
A peculiar phenomenon occurred a few winters ago when the water temperature was at its coldest (usually March) and during a snow storm without strong winds, the snow actually accumulated on the surface of the water until the tidal action broke it up. The snow covered water had an almost gelatinous look to it.

A number of our SKS members attended the Village council meeting last night. It was great to have a member of the Grand Manan Rotary Club speak to council about their international project with the Seminole Rotary Club in Florida. Up to 24 members are planning to come to Grand Manan in September and spend a day and a half working on the buildings at Swallowtail.

We were also pleased to see that the village now has a historic building register which will be beneficial if the older lighthouses can be designated historic and thus fall under the federal Historic Lighthouse Bill. This bill will give the Canadian Coast Guard (CCG) a budget to maintain these historic lighthouses. Actual money directed to maintaining these structures has not been in the CCG budget previously and with budget cuts, maintenance of buildings has been a struggle, so much so that it was the local Rotary Club who raised the money to paint Swallowtail Light.

The Memorandum of Understanding, drafted by our solicitor and discussed at length with a committee of council, has moved a step forward. A motion was made to have it sent to the solicitor for the Village for his opinion. We are hoping for a positive response within 30 days.

It was reassuring and a constant reminder throughout the council meeting, which took place in the North Head hall, that the foghorn at Swallowtail could be heard reverberating through the walls. A thick fog had formed in the afternoon as the temperature rose above freezing and the humidity level rose with melting snow and continued into the evening.

All in all Groundhog Day was a good day on the 33rd anniversary of a severe gale that did a lot of damage to the wharves and shore buildings on Grand Manan, including washing vehicles off the wharf at Ingalls Head and floating shore buildings out to sea. The decommissioned lighthouse on Ross Island, Fish Fluke Point or Grand Harbour Light, was also severely damaged but it is a testament to the strength of construction of the old wooden lighthouses that even today, the main tower is still standing, although most of the structure around it has completely collapsed. A number of the small wharves including the one at Whale Cove and Castalia were damaged so severely they were never rebuilt. A concrete ramp was installed at Whale Cove and the only thing that remains of the wooden wharf are the anchor rocks, large boulders that formed the interior of the wooden wharf and now form a rock breakwater.

The Groundhog Day gale was one of those superstorms, a combination of a number of systems, combined with high tides, and did major damage along the New England coast and Atlantic Canada. Because of the combination of the storm and the tides in the Bay of Fundy, the effects were devastating and the damage was estimated in the tens of millions of dollars.
Posted by LDM at 10:29 AM No comments:

The fog horn is blowing every 20 seconds today as the fog rolled in when the temperature rose about freezing. The three groundhogs Wiarton Willy, Shubenacadie Sam and Punxsutawney Pete would not have seen their shadows here so maybe we can look forward to warmer weather sooner than later, while everyone else has six more weeks of winter.

But the great news is that we have received notice that Swallowtail Keepers Society Inc. is now a registered charity in Canada. This is super and is thanks to an intern working at Lutz Longstaff, Drew Speight, who submitted all the necessary paperwork last summer. We are very excited to continue with this important work and can now offer tax receipts (valid in Canada) for any donations.

We are also keeping our fingers crossed that the Village Council will except our Memorandum of Understanding tonight and we can start work on our lease for the lightkeepers property. If this is accomplished we can then start the process to try to obtain property tax exemption with the provincial government.

It is very much like a jigsaw puzzle where the pieces are starting to fall in place.
Posted by LDM at 6:32 PM No comments: