Friends of the Swallowtail Society used their trip here last summer and Swallowtail as a back drop for their holiday card.  It is reproduced here. 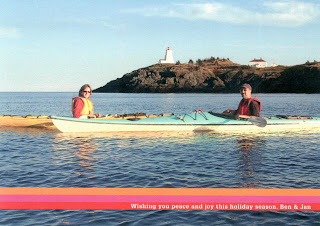 Have you seen this elsewhere? 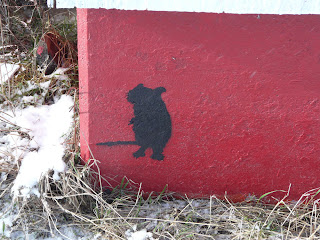 A black rat appeared on the foundation of the keepers house at some point last summer.  Has anyone seen another anywhere else?
Posted by LDM at 6:56 PM No comments:

Here are the stages of progress to restore the southern side of the boat house at Swallowtail up to this point, beginning in 2008 when some thought the building couldn't be saved.  Some work still needs to be done but the building is starting to resume its tidy light station auxiliary building appearance: 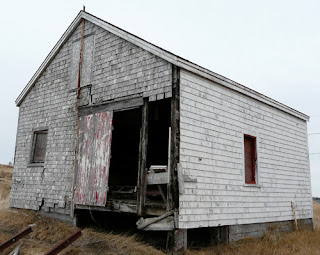 Boathouse as it looked April 3, 2008.  The fasteners had rusted away and the wall was coming off in pieces.  One of the wooden doors was missing and there was no glass in any of the windows.  Part of the sill and skirting were missing and the building hadn't seen any paint in many years. 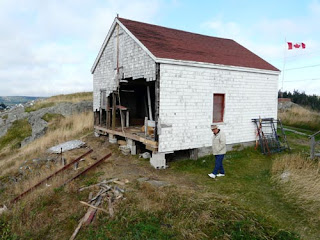 Beginning to tear apart the southern end and add some support to the under structure, September 21, 2009.  This was an emergency repair to try to save the building from blowing down during the very windy winters we experience each year. 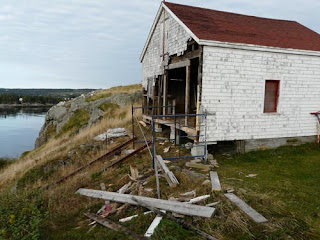 The pile of debris accumulates as more of the structure is re-enforced on October 3, 2009. In most places disposing of construction waste is straight forward but at Swallowtail everything has to be carried along the path and up the stairs before reaching the parking area. The doors are being framed in this shot on. 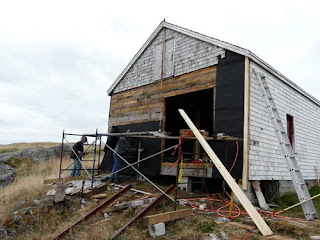 Boarding in the lower portion of the boat house using rough sawn tamarack or larch to match the lumber used to originally build the boat house later in the day on October 3, 2009. 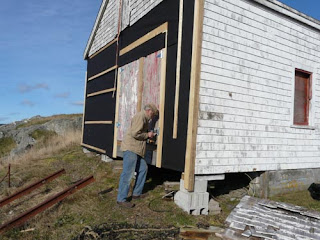 Doing last minute work on the temporary doors for the winter on October 15, 2009.  One of the doors was too short and we were not sure where it was from.  The building was left with tar paper for the winter since the top of the gable end still needed to be stripped and the entire end re-shingled. 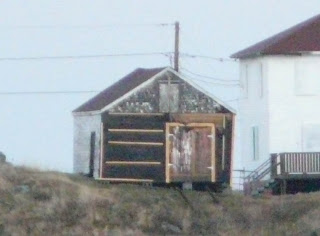 Boat house as seen from the ferry November 16, 2009.  The wind is ever present at Swallowtail and nothing is safe from it as it boxes the compass.  Already some tar paper is missing. 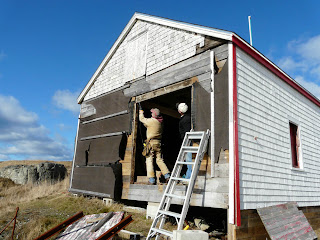 Work on the southern end of the boat house began again in November 19, 2010.  However, other work had been done before this such as painting three sides,  replacing the roof shingles, reinforcing the eastern support posts, rebuilding the entrance ramp on the northern side, and updating the wiring. 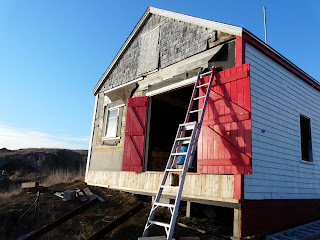 New doors were made on site patterned after a photograph taken in 1958.  The doors are uneven with one being half the side of the other.  A window has also been installed over the work bench.  This is the first glass back in the boat house in many years. This window mimics the shape of the window in the bell house that is attached to the light tower.  Returning the cedar shingling has begun November 25, 2010. 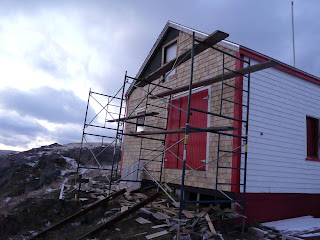 By December 9, 2010 despite snow storms and many days of wind, the cedar shingling is almost complete after the old shingles were removed on the gable end and the boards refastened since they had rusted off.  The upper window had been removed to rebuild.  It was a six over six solid window unlike the two lower windows which are six over six casements.  The lower windows need to be started anew since only a small portion remains.  The corner boards were also replaced, copying the rest of the building.  While the corner boards recently had been painted white, in old photographs they were red.  The skirting in recently years had been painted grey, although again in old photographs and under the grey paint, red paint was the choice. 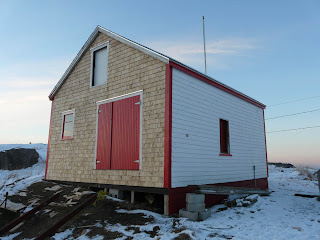 By December 19, 2010 the staging was taken down revealing the new cedar shingles. Once the weather begins to warm, a final coat of red will be given to all surfaces and the cedar shingles will be painted white.  The gable end trim will also be painted red and the upper window returned.  Already there have been positive comments about the red doors.  ﻿
Posted by LDM at 10:05 PM No comments:

The landscape and wildlife can be spectacular at Swallowtail and along Lighthouse Road.  Here are some images captured in the last couple of months. Click on images for larger versions. 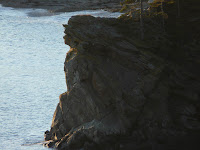 This figure in rock is very obvious if you know where to look.
It is easier to see at high water. 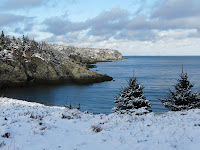 View from the northern side of the keepers house.
Snowy coastline of Hole-in-the-Wall wilderness camp ground. 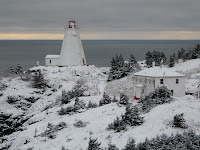 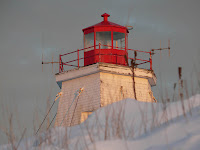 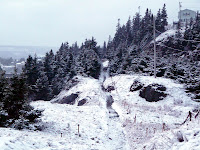 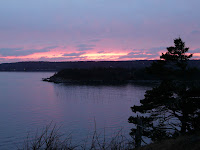 Sunset over Pettes Cove
Posted by LDM at 9:36 PM No comments:

A lot has been happening at the keepers house and boat house since the early fall.  The buildings are being restored thanks to funding from the provincial government and local fund raising. 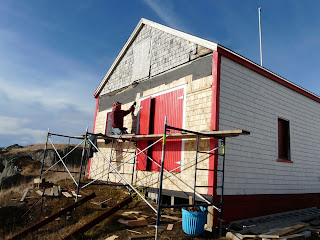 The boat house was badly in need of repair because of the southern wall that was largely non-existent but that has now been rebuilt with the last shingles installed. The red doors have been a topic of discussion from those who have looked up from the ferry or from further down the island. We have windows to repair or have built, including some structural work under the western window, a chimney and wood stove to install and a few other small jobs.  The boat house has been completely rewired, a new ramp and hand rail built and new support posts and skirting installed. 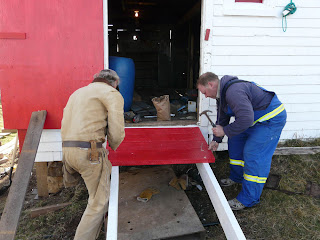 Joe Ingersoll shingling boat house
The keepers house, while on the exterior has been looking much better, has actually been taking a great deal of time.  The major problem has been trying to solve the water leaks.  In a climate where water can be driven up and into buildings, finding areas where the water is entering can be daunting.

The wall paper that was put up for the bed and breakfast has been removed, exposing original paint colours, sometimes vibrant colours that were mixed by one of the keepers, Grimmer Ingersoll.  The original footprint for the house is slowly emerging with the removal of partitions installed for the bed and breakfast.  The old windows are getting a facelift with new glazing and glass where needed.  Storm windows will be manufactured in the new year.  Only six original storm windows still exist and these will be copied.  The original front door has been returned after being stored in the boat house.  Doors that are missing from the kitchen cupboards have been built and chrome hardware purchased where it was missing.  Milk glass globes for some of the ceiling light fixtures were purchased at the Habitat ReStore.  While not the same shape, the style matches the era when the keepers house was built. Most wiring issues have been dealt with but some still exist.  It has been a real challenge to keep new shingles on the roof, despite heroic efforts.  The wind shear can be tremendous. 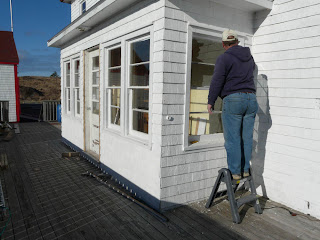 The wind decided that part of the railing on the deck built on the front of the keepers house was not required and the eastern section was "deconstructed", literally blown apart.  It created an entirely different feeling for the deck and with a little work now allows access to the light house rather than having to walk back off the deck and around the house.  While much larger than the original doorstep, the focus is now closer to the original intent with direct access from the keepers house to the light house.
Southern sun porch with original door re-installed.
A big thank you has to be extended to Laurel Hinsdale, daughter of Grimmer Ingersoll, for lending some photographs of the interior of the house taken in the 1960s.  Little details such as the kitchen counter top or ceiling light fixtures have been determined, including a picture of an old cook stove that was in one of the kitchens of the duplex.  A similar stove was purchased from at a local business and will be installed once the kitchen is ready for it.

Because of the long distance to carry material or tools or remove refuse, creativity has been required at times.  Whether walking out or back, seldom are hands empty.  A well stocked tool kit is also emerging so the tool that you need isn't up the 54 steps. 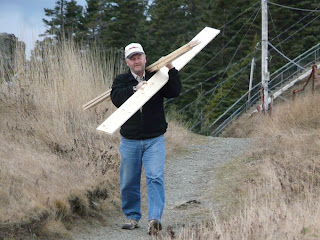 It has been a treat spending so much time at Swallowtail.  Weather conditions are always more extreme but the marine vista is marvellous.  Whales, seals and seabirds are often seen and sometimes land birds such as Bohemian waxwings, gyrfalcon, peregrine falcon, bald eagles and others passing through.  White-tailed deer are often seen on Lighthouse Road.  Snow in the last week or so has changed the landscape and unlike most years, the snow has lingered.

Ken carrying pine along the path from the top of the hill.
Posted by LDM at 9:17 PM No comments: