Lighthouses are usually located in the face of storms, exposed on several sides to strong winds and sea spray, frequently difficult to get to and challenging to maintain.  With lighthouses de-staffed or de-commissioned, budget cuts rampant, and maintenance minimal, it is hard to see these once well-maintained structures deteriorate to a point that they begin to crumble but it is becoming all too common.  The magnitude of the maintenance or restoration, and the ability to get to the lighthouse is often overwhelming. We have been fortunate with Swallow Tail that ownership has been transferred, access is challenging but better than many, and through the support of the community and access to various sources of funding, restoration work has been possible.


Unfortunately, in five months, three other lighthouses in the Maritimes have disappeared.  Two collapsed during storms, the abandoned Fish Fluke Point on Ross Island decommissioned in 1963 but defied gravity for years (November), and Church Point on St. Mary’s Bay, NS, decommissioned in 1984 (March), and one burned to the ground, the remote fibreglass lighthouse at Point Aconi on Cape Breton Island (February).  Fire was always a worry before lights were electrified.  Elodie Foster, one of the light keepers at Swallow Tail, died from her injuries after her clothes caught fire while trying to start the burner for the light.  More recently, electrical issues may be the cause of some fires because of the heavy salt presence and corrosion of electrical connections. Two electrical issues at Swallow Tail threatened to cause fires last fall and had no one been working in the lighthouse, the problems would have gone unnoticed until it was too late.  Vandalism has also been a cause of some fires and has plagued locations such as Partridge Island in Saint John, and may have been the cause of the grass fire at Swallow Tail in April, 2007, which threatened the lighthouse and keepers house.  It has prompted some communities to install security cameras.   The ones at Swallow Tail can be viewed on the Village of Grand Manan website (www.villageofgrandmanan.com). 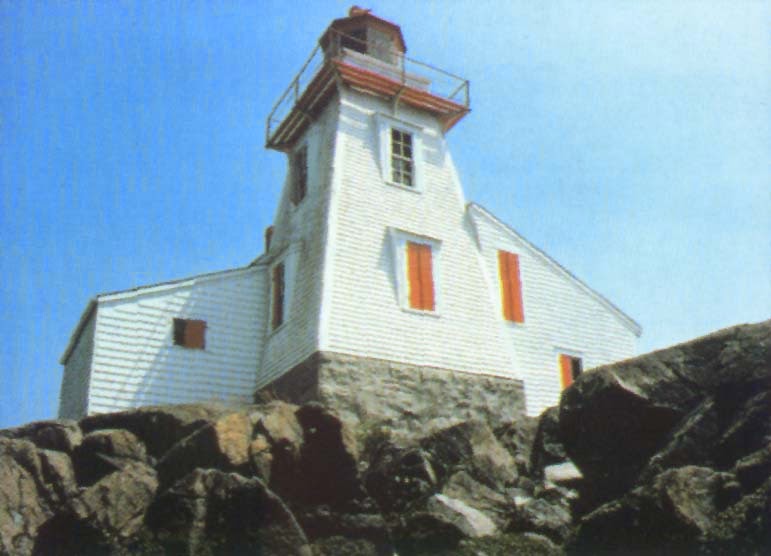 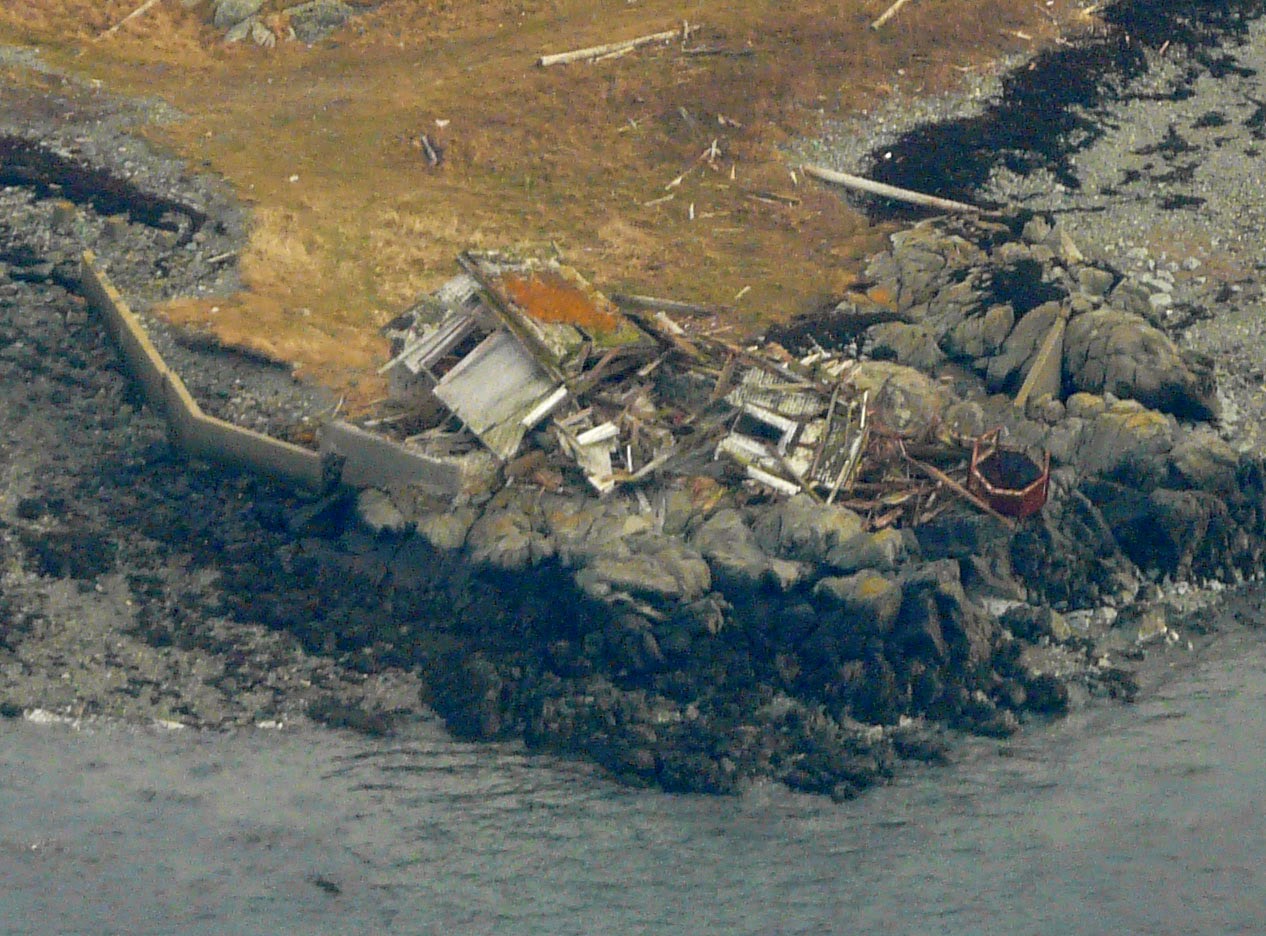 Collapsed Fish Fluke Point lighthouse as seen from the air in November 2013. 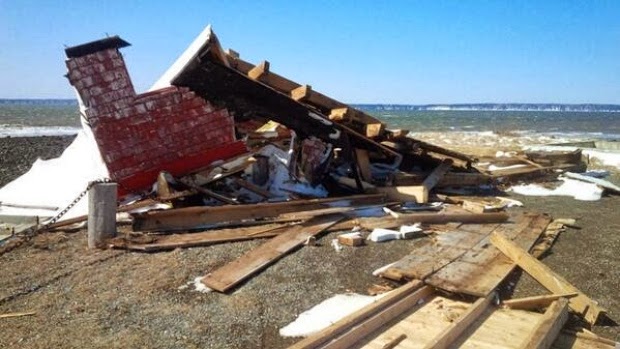 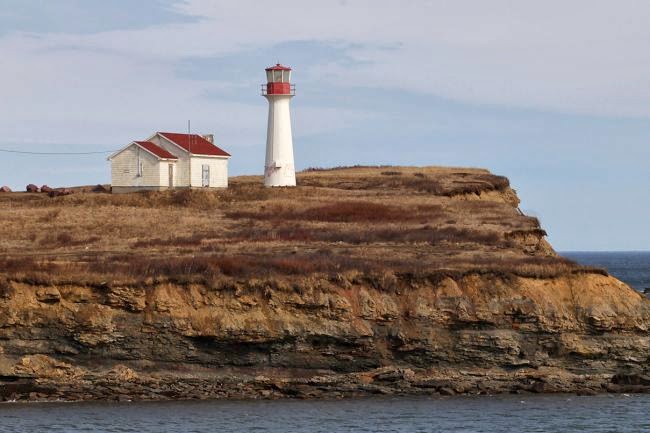 Point Aconi lighthouse before it and the building beside it, burned to the ground in February, 2014. (from Cape Breton Post)

Collapse was not thought to be an issue at Swallow Tail but once work began last fall, it became apparent that it could have been possible.  The lime had eroded out of the mortar, making the mortar crumble.  The stone foundation was slowly pancaking, with the stones being pushed outward.  The eight guy wires and the massive concrete floor in the equipment room were the only things holding the tower upright with probably only five large stones in the foundation carrying weight.  Had any of the guy wires failed, the tower would have begun listing or worse.  To fix this, all the stones were removed, one side at a time, and then returned with new mortar between the joints. The large corner stones, too heavy to easily lift, were adjusted back into place.  The foundation is now functional again and should last for many more years with minimal maintenance. 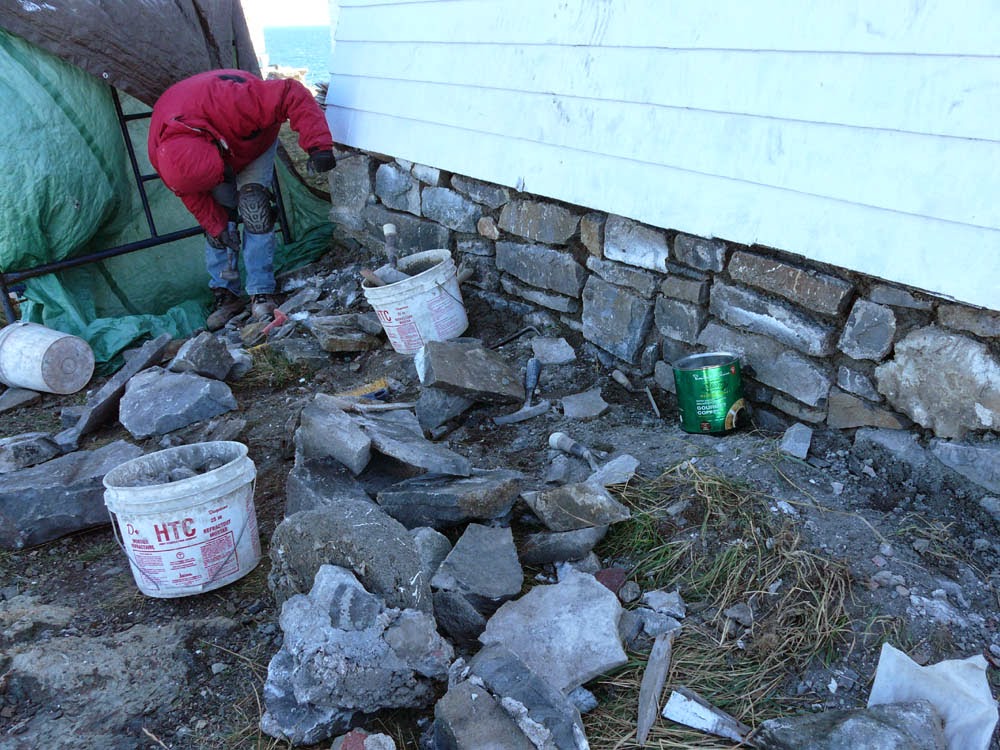 Peter Devine rebuilding stone foundation at Swallow Tail, September 2013.
During this process, it was discovered that the large wooden beam under the front door had completely rotted away.  The remains of the beam were removed using a dust pan.  Instead of trying to fit a new wooden beam back in a very tight space between the large immovable concrete step, stone foundation and the floor joists, a concrete beam was constructed.  One of the 1859 wooden pegs, used to hold the heavy timber structure together, was discovered in the crawl space during the work, looking the same as the day it was made.  This was the only spot were the heavy timbers of the lighthouse had completely rotted. 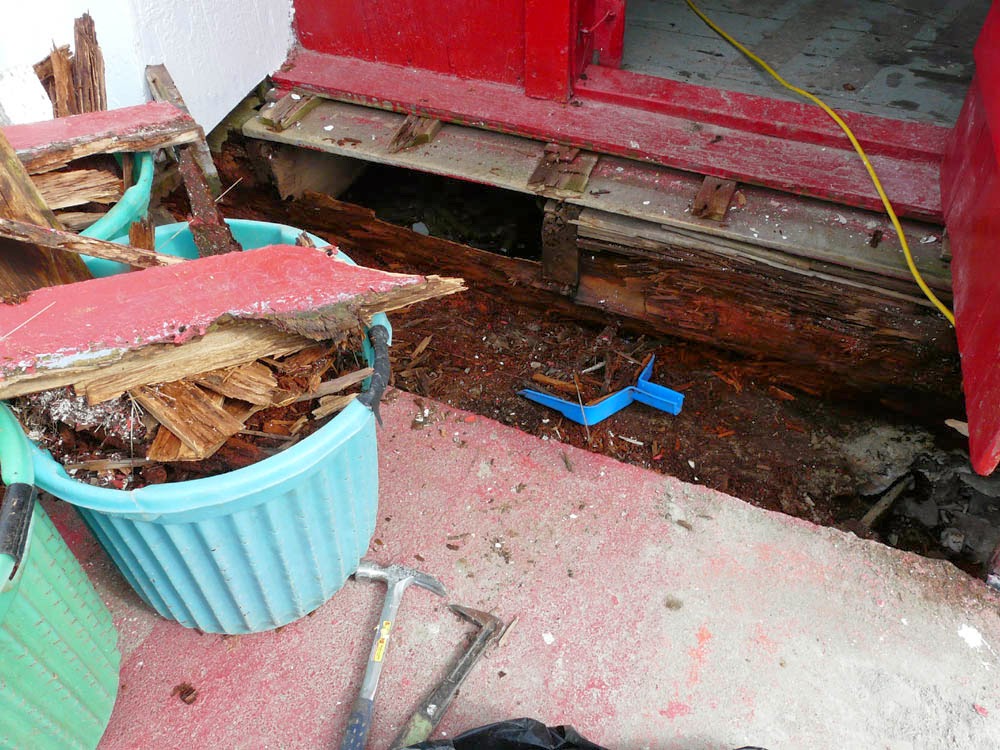 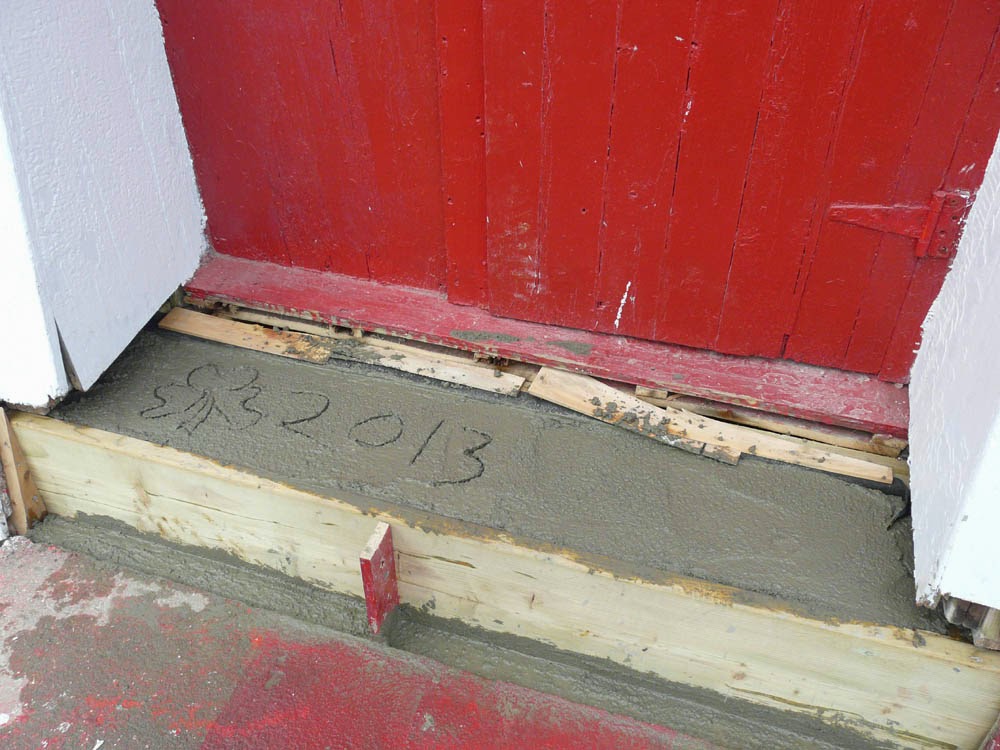 New concrete beam to replace rotted timber, September 2013.
Salt corrosion is another challenge, rusting nails so they no longer do their job.  When some shingles were removed on the northern side of the bell house, the boards underneath came off as well.  This was also an earlier problem with the boathouse and the entire southern wall began to fall off in large pieces as the nails disappeared and that wall had to be rebuilt.  The shingles were stripped off the bellhouse, the boards renailed, and new shingles returned.  Shingles on some sides of the tower were also falling out because the nails were gone.  Face nailing to hold them in place during previous work only complicated the problem with water getting behind the shingles and rotting the wood.  Several places on the tower, notably where the windows had been boarded up, were in worse shape than the rest of the lighthouse, even though the boards were only 40 years old compared to over 150.  As the rot continued, longer nails were used to hold the shingles which further exacerbated the problem.  It was very noticeable while scraping the sides where the problems were located because of the sponginess.  Replacing the rotted wood and shingles where required, caulking the nail heads, plus one to two coats of primer and two coats of finish paint will prevent this for a few years. Because of the extreme weather conditions experienced on the point we hope in the future only the paint will suffer and not the wood behind. 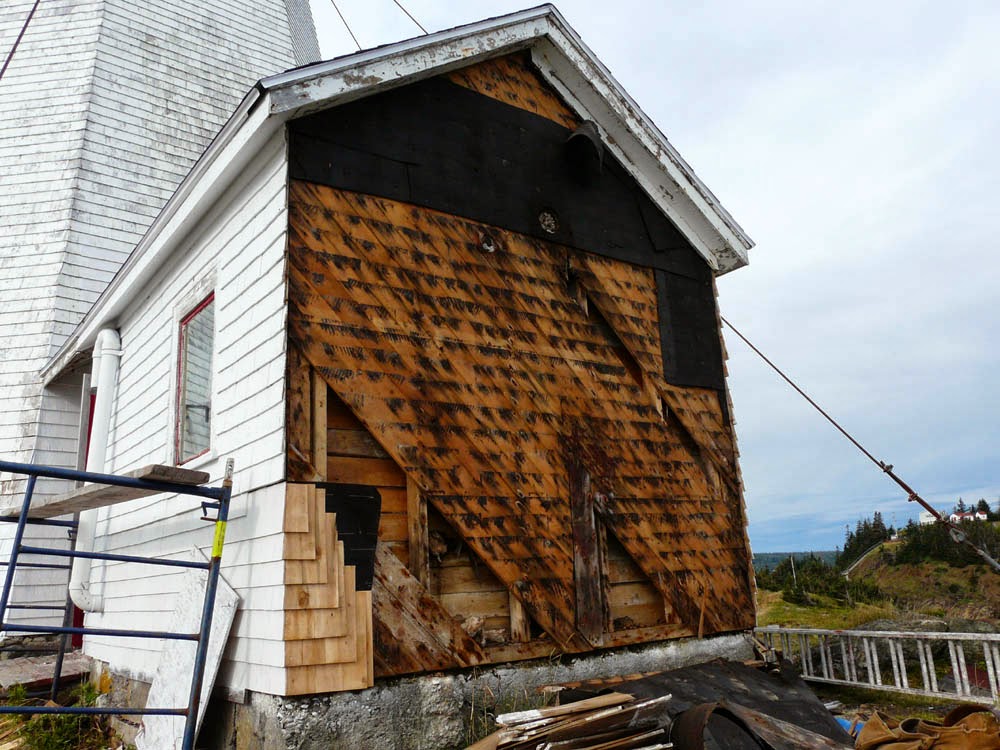 Northern wall of the bell house.  The nails had rusted off and the boards had to be nailed back in place before the shingles could be attached. 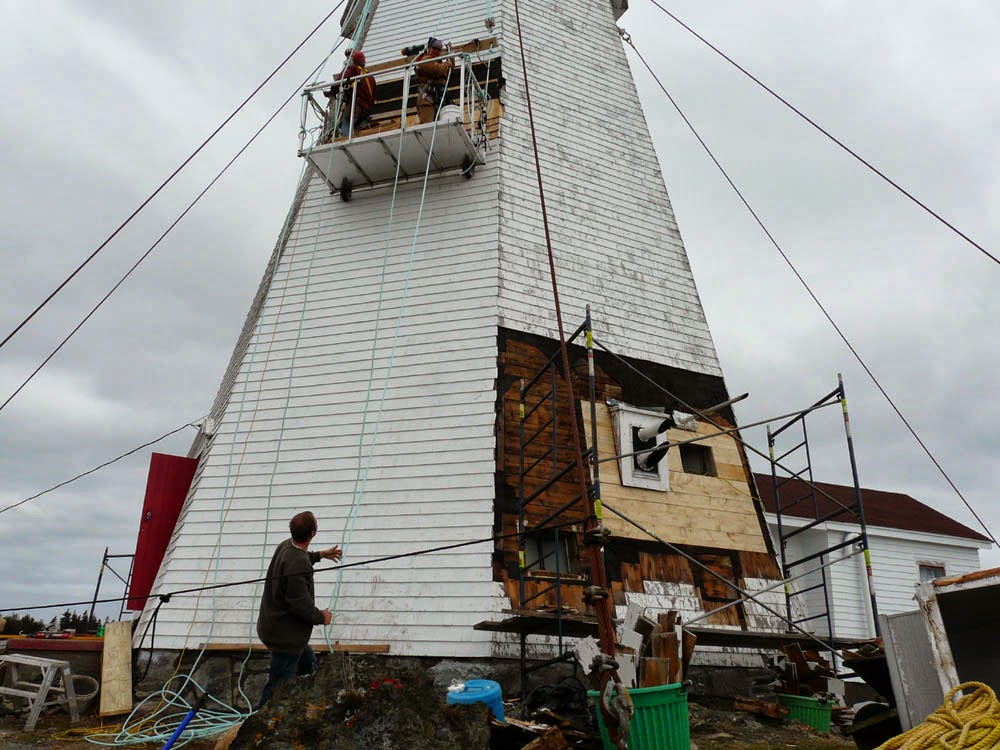 Areas on the lighthouse that needed repair because of water penetration causing rot.  The area around the fog horn was because of caulking and flashing failures.  The upper area on the tower was probably because of face nailing shingles allowing water to penetrate. 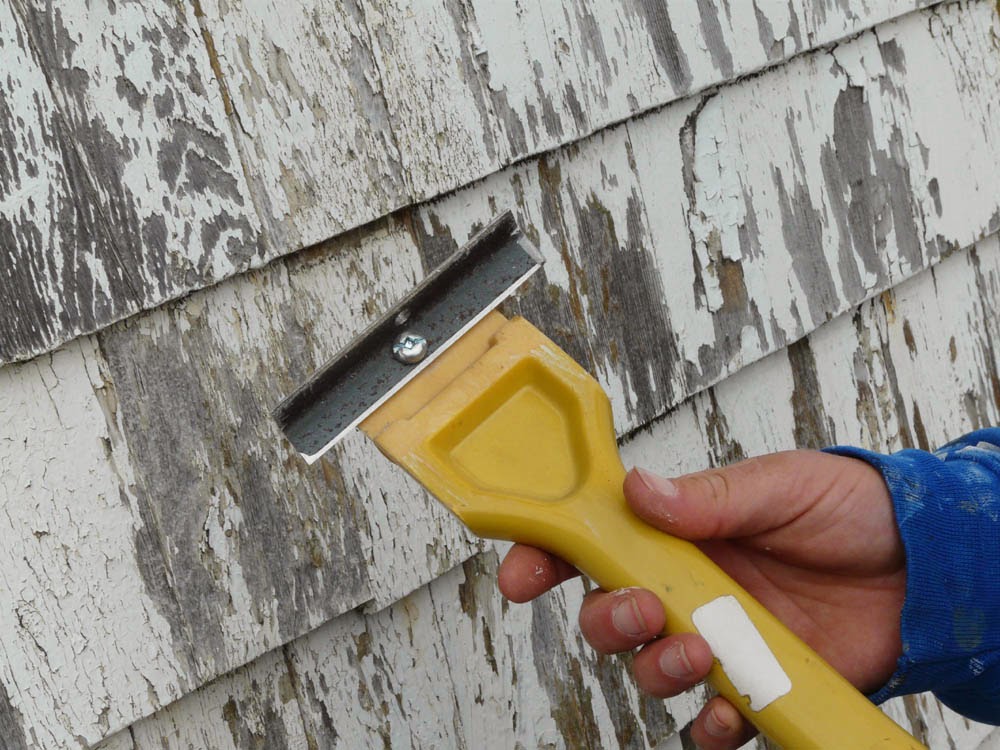 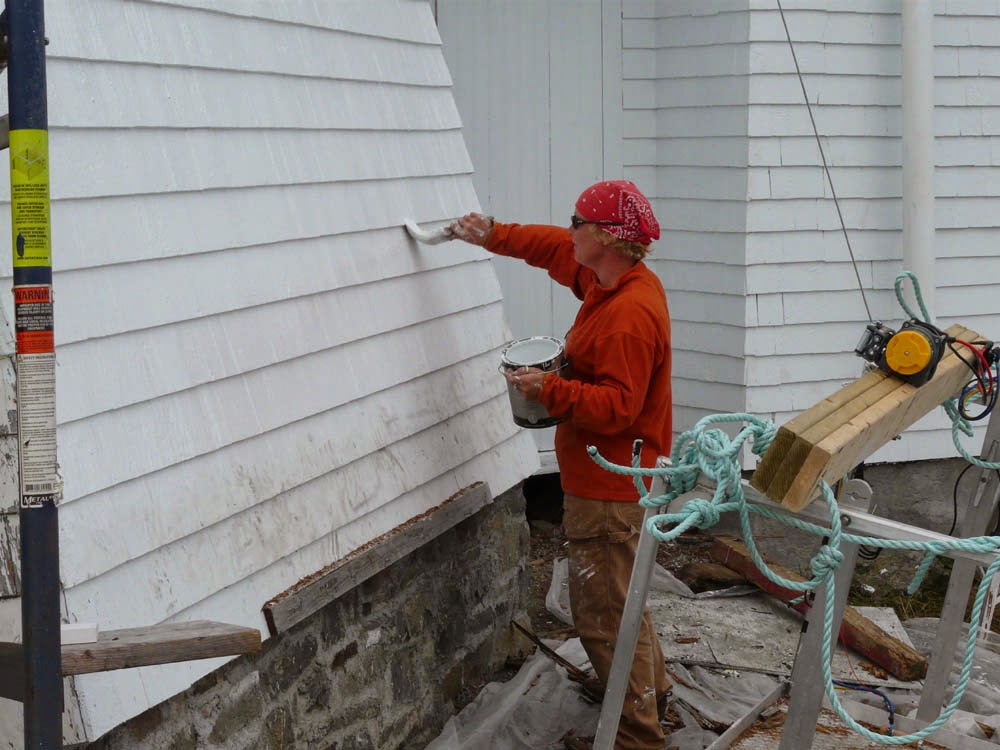 The entire lighthouse and bell house were scraped, primed and received two coats of paint.  The new shingles were primed twice.
Removing the windows in the tower in the 1970s was actually beneficial in many respects since there was little maintenance after the lighthouse was destaffed, but it changed the interior with no natural light or ventilation.  Having the opportunity to return the windows to the original locations in the lighthouse was a goal during the restoration but a challenge since everything had to be built from scratch.  One window could not be returned because the current fog equipment is located in that spot on the first floor.  Windows from an 1849 house in Ontario were donated by the owners, who had once worked at a lighthouse in British Columbia.  They were honoured to have them reused at Swallow Tail.  The storms and gablets (or dormers) were new construction from mahogany with copper flashing and sills in an attempt to resist the harsh climate.  The interior has been completely changed with the additional of natural light and makes it a very pleasant inside. 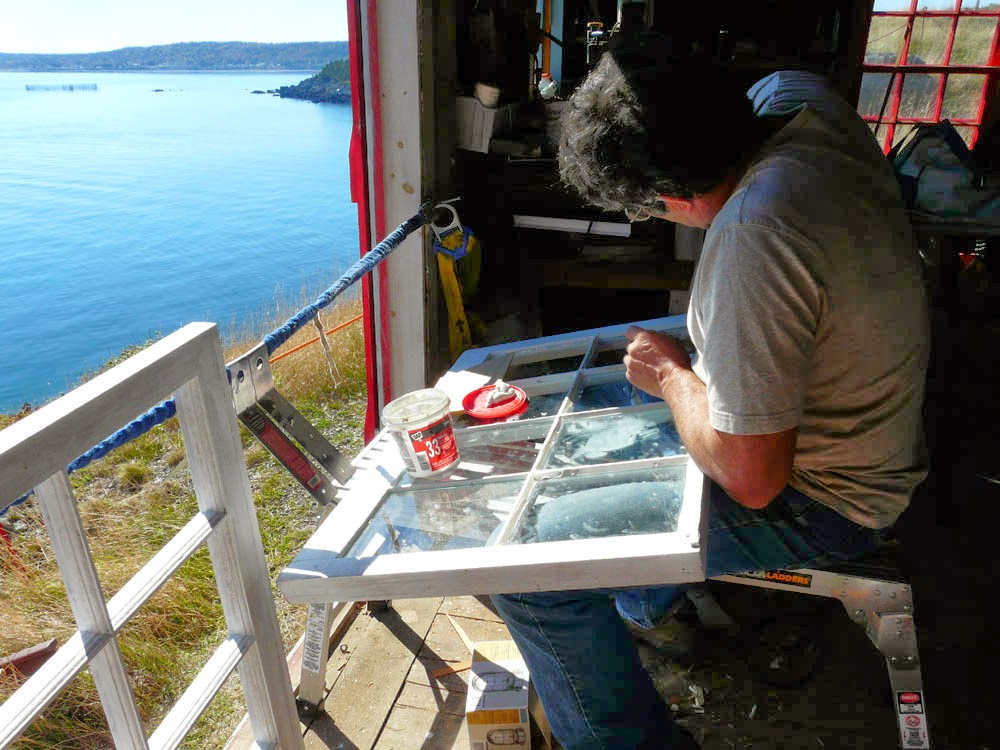 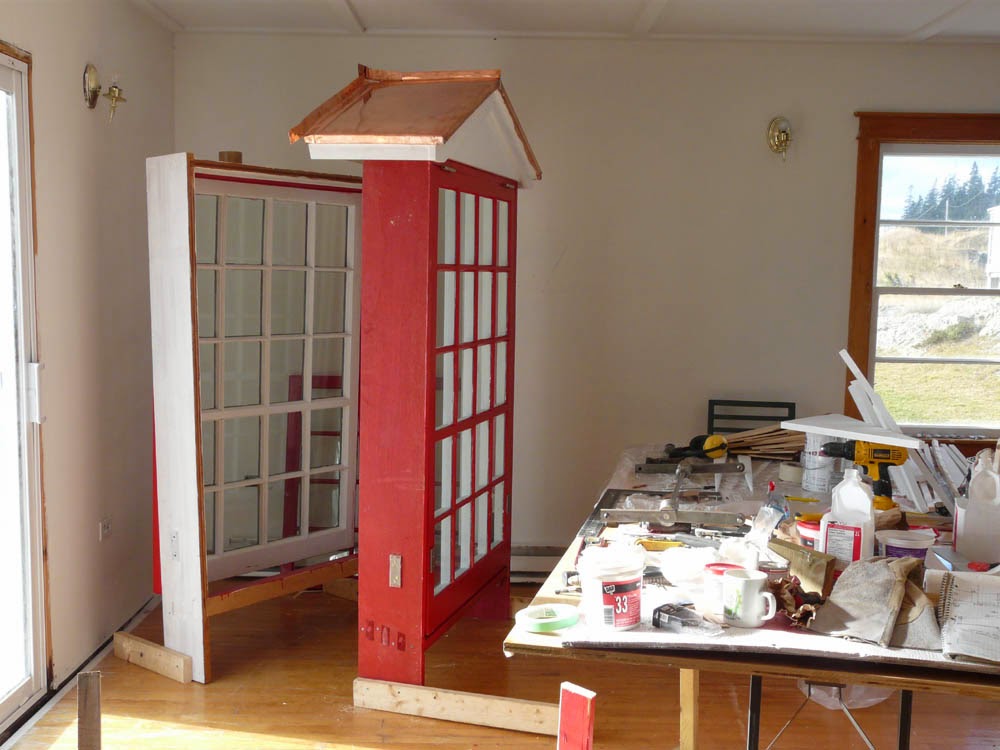 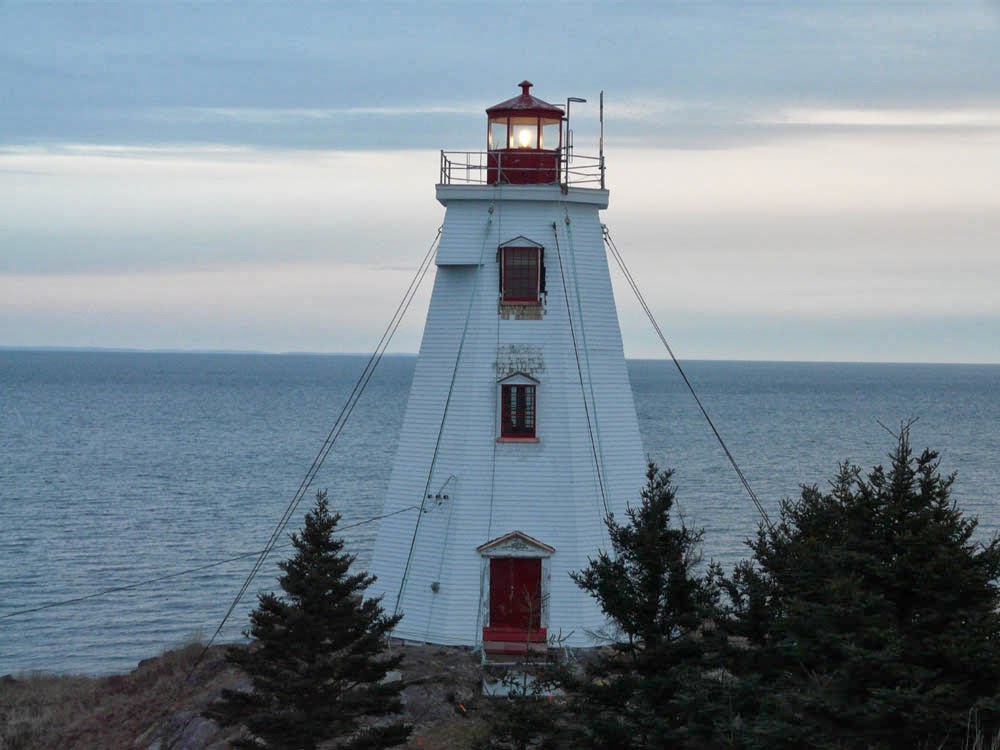 Windows restored on the southern side of the lighthouse.
The harsh winter weather stopped work in mid-December at the lighthouse.  Work will begin again sometime in April.  The windows and interior will be completed including repairing the lathe and plaster and painting, the boardwalk from the keepers house (cabled in place to protect it from the strong winds) will be built, and museum displays installed.  We are hoping to have the lighthouse open again this summer.  Restoration work could not have been possible without the financial assistance of the Atlantic Canada Opportunities Agency, Regional Development Corporation, New Brunswick Built Heritage, Village of Grand Manan, Grand Manan Rotary Club, and generous donations.
Posted by LDM at 12:34 PM No comments:

A spring blizzard  moved through quickly March 26, leaving behind sunny skies, either bare ground or snow banks and sea ice on exposed coasts after storm to hurricane force winds.  As in February 2013, Swallow Tail took the brunt of the storm but the quick movement of the storm resulted in some sea ice frozen across the peninsula but not nearly as thick as in 2013.

Power was out on the point for 24 hours after the salt spray tripped a breaker on the pole (over 36 hours in 2013).  Two of four webcams no longer work after the wind, salt spray and power outages took their toll.  The antenna for the WiFi for the ferry blew off the boathouse, laden down with ice.  The poor flag that was flown for the first time only two weeks ago is now a tattered shred, despite reinforcing the outer edge.

Here are some photos: 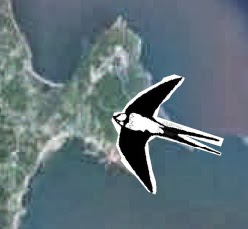 Many thanks to the Village of Grand Manan and Alpha Securities for the web cameras and internet to broadcast the video.

The webcams are accessible on the Village of Grand Manan website: http://villageofgrandmananc.netfirms.com/photos/ 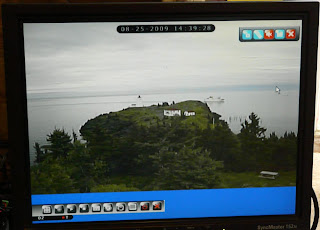 Follow the instructions for access to the Swallow Tail Webcams. There are three camera views available, a view of the lighthouse (and also the ferries as they pass or any other vessel), a view of Pettes Cove and a view of the top of the stairs (helps for counting the number of visitors!).

Now that Swallowtail Keepers Society has a long term lease for the complete Swallow Tail Light Station, we have begun to offer some of the programs we hope to run in the future.  This includes tours of the lighthouse.  These tours are given when our volunteer or student are available and are not offered at all times.  Each tour is personalized and you have a great opportunity to learn a little history of the lighthouse, visit all four levels including the lantern and take some amazing photographs of spectacular views.


We will be doing some restoration work later in August and these tours will not be available at those times.  Because we are still raising money for the restoration work, the tours are not free.  A donation is required so make sure you have some cash with you.  You can check at the Welcome Centre if any tours are available on a particular day.

Even without access to the lighthouse, the peninsula is wonderful to visit.  Fin and minke whales, harbour and grey seals and harbour porpoises can be seen from the lookouts, as well as many species of seabirds.  Bald eagles and peregrine falcons are common visitors.  Fall migrating land birds often make first landfall at Swallow Tail.  The herring weirs are active this year and you may be lucky enough to see them seine the herring out.