A grant from the New Brunswick provincial government allowed the Grand Manan Historical Society to begin the Village of Grand Manan Historic Places Registry. Twenty-four places have been added and can be viewed on the http://www.historicplaces.ca/ website. A search of the Canadian Register of Historic Places for Grand Manan, NB will bring up everything that is listed for Grand Manan, including the Swallowtail light keepers house and boathouse. Also three light towers (Swallowtail, Gannet Rock and Machias Seal Island) and another keepers house (the house attached to the Gannet Rock lighthouse) have been listed as Recognized Federal Historic Buildings, a precursor for the Federal Historic Lighthouse Bill. The brick government building in North Head, known for the Post Office, is also a Recognized Federal Historic Building. The final listing is the National Historic Site in Seal Cove, encompassing the herring smoke houses and seawall. 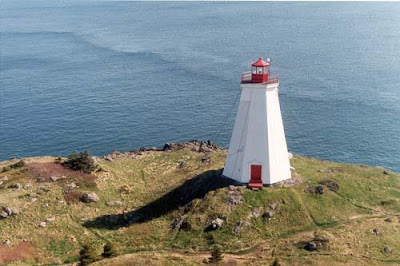 The push to save Swallowtail was helpful in kick-starting the Village Registry. It is hoped that this funding will continue so more of Grand Manan's historic places can be listed.
Posted by LDM at 11:35 AM No comments:

I often think of tending a light as being one of work, whether maintenance of the property or the light but because families often lived at these light stations, there was time for entertainment. Norma Neves loaned me this photo of her mother Alma Naves on a seesaw with Doris Moses, taken in 1959. You can see Swallowtail lighthouse in the background. This seesaw would have been in the yard of the old house, just above the new house. The new keepers house was built in 1958 and replaced the original 1860 house which was torn down. A replica of this seesaw would be a great addition to the property. Notice also the bird houses. There were a number of these around the keepers house and lighthouse. Not sure what species they were built for but would be a good question to ask those who lived at Swallowtail. You can also see the chimney that heated the bell house, the small addition on the lighthouse. This building was moved in 1922 from the extreme end of the peninsula to the lighthouse to make ringing the fog bell easier for the keepers, instead of hiking back and forth from the lighthouse to the bell house on the point. anyone who is familiar with the Bay of Fundy can appreciate how much work this would be in our often long stretches of fog, particularly in the summer but can occur year round , as it is today as I write this post. 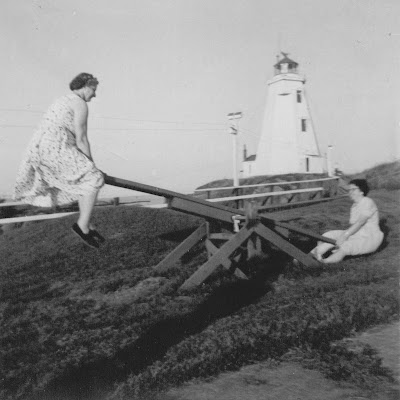 Norma also had an undated photo of herself on the boardwalk leading from the keepers house to the lighthouse. You can clearly see the detail in the windows that used to grace the lighthouse, removed to reduce maintenance and water leakage. The windows were single pane, 12 over 8. The porch covering the entrance to the lighthouse also no longer exists and when the soil was removed from around the lighthouse to remove lead from years of scrapping and painting the lighthouse, the soil level is significantly lower. There was concern that the lead in the soil was slowly leaching toward the coast and could one day end up in the ocean. The boardwalks no longer exist as well, although they were an original feature when the lighthouse was built in 1860. This extensive system of boardwalks would be a wonderful asset to rebuild, however, because of the wind and winter gales, maintenance of the boardwalks was a challenge with storm damage frequently occurring. They would have to be firmly attached. The style of the railings is similar to the existing railings on the footbridge. 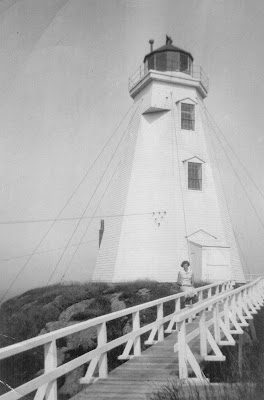 Thanks Norma for the loan of these photos.
Posted by LDM at 2:37 PM No comments: