A chilly December 30 left the glass in the Swallowtail lighthouse frosted, giving the light a diffuse glow. No heat in the light tower prevents the frost from melting off the glass when it is cold. 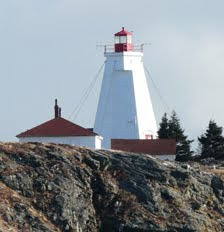 Labels: frosty day, Swallowtail
Just one more day left in this first decade of the twenty-first century. It has turned cold today , -14C, after being 8C just a couple of days ago and 1C yesterday. It also feels colder because of the strong NW wind which has been rattling our house all night. Looking toward Swallowtail this morning, the sea smoke or ice fog or as it is called locally, vapour, is being pushed up and over the lighthouse. The windows in the lantern are frosted over giving a soft glow to the light.
Here is a short video of Pettes Cove and Swallowtail with the sea smoke being blown over the surface. The top poles of Cora Belle weir can seen in the sea smoke.
What a chilly day it would be to be a lightkeeper at Swallowtail, having to walk from the keepers house to the light tower and back. It is quite evident on days like this why there was a board walk with a railing connecting these two buildings. It would be easy to get blown off the path and add blinding snow, get lost on this short walk.
The automated light today keeps working for the most part with little maintenance, although no one is keeping heat on in the tower to keep the windows free of frost there are few on the water these days looking for the guiding light.
Sea smoke, ice fog or vapour surrounding the top poles of the Cora Belle weir in Pettes Cove. 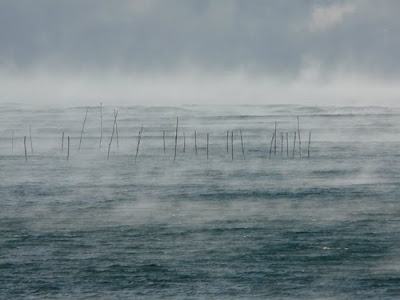 Sea smoke, ice fog or vapour forming on the surface in Pettes Cove. 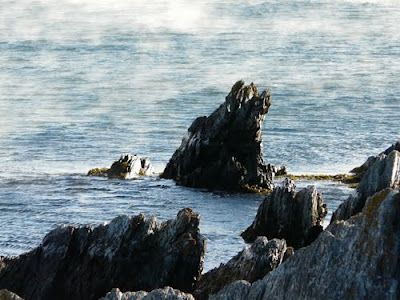 Icicles from water runoff on the cliffs near Swallowtail. 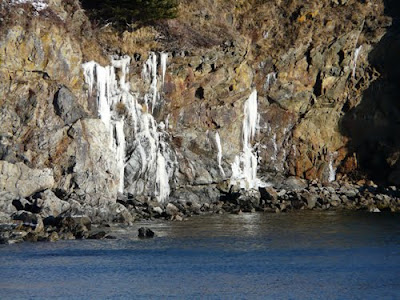 Icicles on rocks near foot bridge leading to Swallowtail. 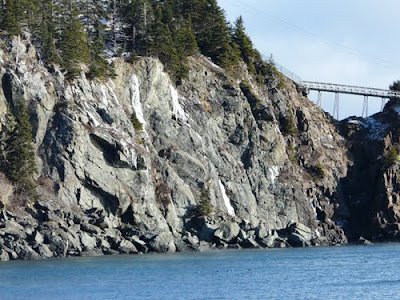 A light covering of snow is still holding on to the Swallowtail peninsula, with the lighthouse in competition for whiteness on the point. The temperature has been a steady -2C all day and overcast with relatively light winds.

A walk down to Pettes Cove was a delight without having to buck strong winds. There was one other person on the beach, looking for beach glass and a harbour seal just offshore. Lots of white-tail deer tracks through the snow and the ravens and herring gulls have been busy with their daily foraging. Not sure who found the giblets from the turkey that I left in the back yard on the snow but they have disappeared.

A very nice peaceful day, the last Christmas in the first decade of the twenty-first century - where has all the time gone? Was it not just 1999 and we were all wondering what this new century would bring?

Happy Holidays!
Posted by LDM at 4:23 PM No comments: