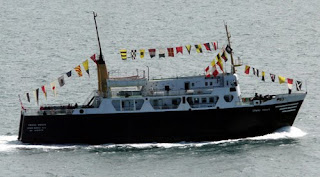 A cake was available for all passengers and balloons decorated the saloon.  Signal flags were hung from bow to stern and across the bridge.  Several people took this last opportunity to ride over on the ferry and back again.  The last trip had special invitations to Allison Thomas who was the first passenger in 1965 from St. Andrews and Fraser Shepherd who works as captain on the "Grand Manan" for many years.  The ferry captain saluted the island as he backed away from the wharf with a long blast on its powerful horn and again as the ferry went around Swallowtail for the last time.  Both ferries saluted each other as they crossed paths along the ferry route.  Aerial photos were also taken.  The ferry will remain in the area until the new ferry arrives as a back up in case anything happens to the "Grand Manan V" but today was the last scheduled.


Swallowtail has seen many firsts and lasts and this is one more.

MV "Grand Manan" passing Swallowtail Light on the 9:30 trip to Blacks Harbour.
Posted by LDM at 6:20 PM No comments: