Helicopter makes use of flag 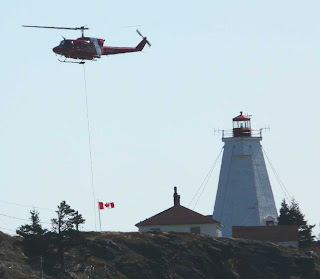 The crew hired to cleanup the lead paint contamination at Swallowtail had their equipment helicoptered back onto the peninsula today after breaking off their work during the winter months. They have another month left and when finished will have spent four months cleaning the soil where the original keepers house stood and around the base of the lighthouse.
On Saturday as part of our Earth Day work party, the flag pole and flag were re-hoisted. The red and white Canadian flag seems to finish the scenic vista and was invaluable to the helicopter pilot today as the wind shifted during the many trips bringing equipment from the pick up site at Hole-in-the-Wall Park to Swallowtail.
Posted by LDM at 2:06 PM No comments: 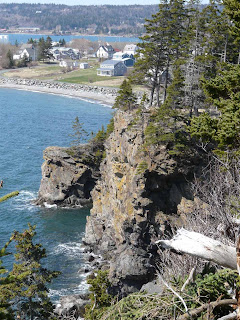 On Saturday, April 25, about one year since we organized the first cleanup at Swallowtail, 30 people participated in projects at the upper section of the Swallowtail light station. This is the most accessible part of the light station and has parking, a pump house, and a shed which was originally part of the Fish Fluke Point light house and was used as a boat house (we frequently refer to it as the Ross Island boat house). The group successfully shingled the pump house and half of the old boat house/shed. The shed had both cedar and asphalt shingles which made stripping the roof more time consuming because of all the nails. Despite the fact that the roof had been leaking for quite some time, there was very little rot and that was easily fixed. The shed was also scraped and readied to be painted. The grounds were cleaned up around the buildings.
In addition, concrete footings for a new observation deck were dug, pinned and poured. This deck will wrap around the old boat house and provide a wonderful view of the light house and peninsula.
Part of the trail that originally ran from the stairs that lead down to the light house to Pettes Cove was cleared of fallen trees and undergrowth and is now open for use. This section can be accessed from along the road leading to the light house or at the head of the stairs and walking back toward Pettes Cove. There are some marvelous views of Pettes Cove and Net Point.
Lunch was provided by members of Swallowtail Keepers Society and included hot dogs, egg salad sandwiches and curried chicken pitas.
We hope to have more work parties throughout the spring, summer and fall. Work will begin on the deck shortly. The last half of the roof will be shingled soon. Then there is painting, painting and more painting. Fixing some of the windows. The Canada Day flag raising. Working on the southern wall of the boat house. Making the keepers house watertight. Replacing the roof on both the boat house and keepers house.....
Anyone who wishes to help physically or by donating material or by donating money can contact any of the Swallowtail keepers.
Posted by LDM at 4:37 PM No comments: 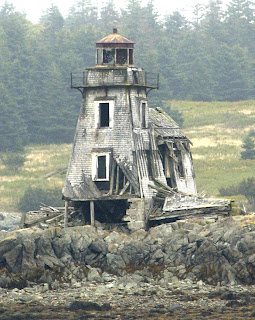 I had to spend 10 days in Calgary recently under less than ideal circumstances. As I was going through some old calendars as part of papers I was sorting, I found a photo of Fish Fluke Point light house, also known as Grand Harbour light house. This building has been abandoned since the early 1960s and still refuses to fall down, although one wonders how long it can remain standing. At one point it was designated as Canada's most endangered light house but still continues to collapse. When you think of how many images could make it on a calendar, it becomes obvious that Grand Manan is a special place in Canada and I certainly had a rush of nostalgia.
The old boat house from this light house was moved in the 1960s to Swallowtail and now sits at the top of the hill. Most people now think the building is a garage, which essentially is what it was used as by the former light keeper Grimmer Ingersoll, who with his brother, towed the boat house to its present location.
I always find it sad to see our "built" history disappear. Soon the only reminder of this light house will be photographs. Hopefully, the Swallowtail light station will be a better example of a community that is trying to preserve some of its history beyond the occasional photograph.
Posted by LDM at 4:19 PM No comments:

Moving the bell off the point 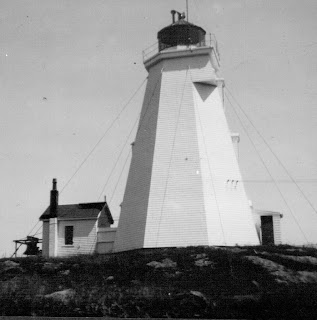 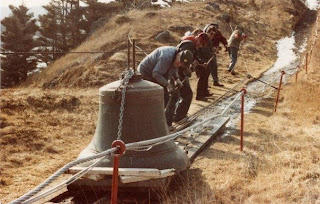 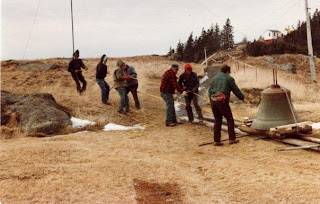 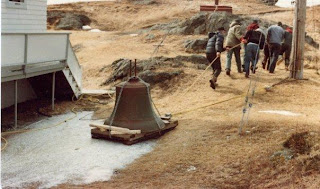 The fog bell at Swallowtail was first installed at the very tip of the rocky penninsula in 1915. In 1916 a new wooden building was built beside the bell, the bell house, and the bell was mechanized. I suspect that because of the distance from the light tower itself and the necessity to ring the bell in response to passing vessels, it was decided to move the fogbell and building to the base of the light house on the northern side, which was also closer to the light keeper's house. All that remains on the point are some rusted steel girders and crumbling concrete. People often ask if the light house sat on the point when they see the old girders but the light tower is in its original location.
When an automated fog alarm was installed there was no need for the fog bell and it was taken off the peninsula using brute force and a bit of ingenuity, sometime after the arrival of the "Grand Manan" ferry which started its run in 1965 and still operates as our additional summer ferry.
The three photos showing the men dragging the fog bell were posted to the Facebook page "Grand Manan Old Photos 2" by Elliot Shepherd. The photo of the bell house, bell and mechanism was taken by Elmer Wilcox in 1958. The bell now sits behind the Grand Manan Museum beside the Deep Cove School. It is possible that in the future the Museum may be willing to have the bell returned to Swallowtail as part of our restoration of the light station.
According to Laurel Ingersoll Hinsdale, some of the men moving the bell are her father Grimmer Ingersoll, Allison Naves, Kenny Thomas, Frasier Shepherd and Bill Bass.
Laurel also recounts that the bell was rung by being struck by a huge hammer run by an engine inside the bell house. There is a crack and flattened area on the bell from this. When it was no longer used in this way, you could manually raise the hammer and drop it to make the bell ring. This used to be done when the ferry passed, and the ferry would answer back. The bell was rung each time the "Grand Manan" III went by, but was stopped when the "Grand Manan" came on. Laurel remembers ringing it for fun to the "Grand Manan", and the thrill when the ferry answered back!
Posted by LDM at 9:23 PM No comments:

The article was aired on CBC radio as part of Information Morning Moncton programming in March (2009):

"A RIVER RUNS THROUGH IT Portraits of Two Solitudes. Information Morning Moncton will play the first of five stories in this Maritime series. Tune in each Monday starting March 16 for a snapshot of two communities (one French, one English) of similar sizes with similar attributes."