Light in the stormy night 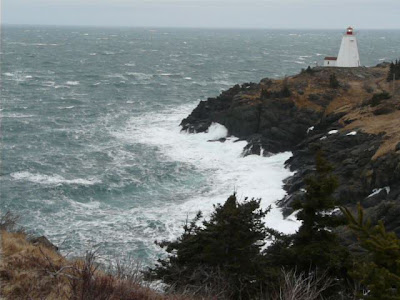 We have had a stormy few days with ENE winds battering Swallowtail. Heavy rain and wind (over 90 kilometres/hour or 50 knots) last night knocked out the power for awhile. Swallowtail's light and foghorn are electrically powered and when the power goes off so do the light and foghorn. Backup systems used to be commonplace but transporting diesel fuel for generators by helicopter can be a risky business if anything happened to the bladder containing the fuel. This means that you don't have to look for the light to shine across Pettes Cove from Swallowtail when the lights go out because Swallowtail light goes out as well. And, of course, with no light keepers there is also no one to make sure a back up system kicks in automatically.
The only vessel plying the waters around Swallowtail the last couple of days has been the Grand Manan V ferry and even the ferry was tied up for 20 hours because of heavy seas. The guiding light of Swallowtail certainly isn't as required for navigation as it once was but it is a comfort to see the rotating light in all weather conditions, as long as there is power.
The ferry heading towards Blacks Harbour after being tied up from Thursday, February 25 at 3 PM to 11:30 Friday, February 26 because of stormy conditions. The ferry buried her bow going across Pettes Cove. 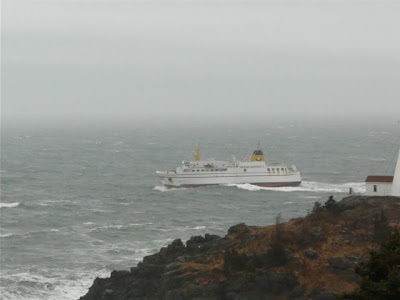 Here is a short video of the roiled waters in the Saw Pit February 25.
Posted by LDM at 2:41 PM No comments: 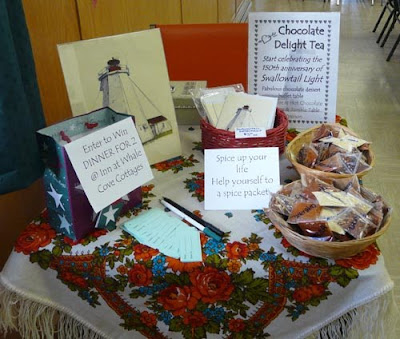 What a great success! Our chocolate tea was impressive from the old fashioned hot chocolate to an incredible assortment of chocolate desserts. The aroma of chocolate greeted everyone who came through the door. The approximately 55 people attending all went away smiling. We also offered $5 and $10 take-away plates of which many were destined for the largely absent male participants.

The eclectic range of the donated items in the jumble table also sold well and we have some remaining for a future event. We also had Swallowtail matted photos donated from a local photographer for future fund-raising. 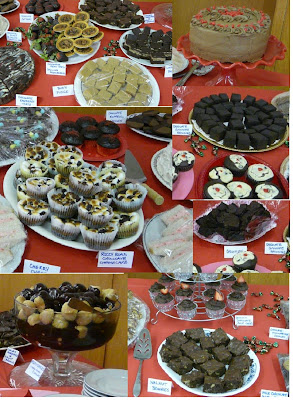 There are so many people to thank from the North Head Baptist Church for donating their hall and providing some entertainment and decorations, to everyone who made desserts and sandwiches, to those donating items for the jumble table, to those organizing and working the tea, and several people who volunteered to bus tables and do dishes after they finished their plates, and of course, to everyone who came out and enjoyed the afternoon. The money raised will be put toward the 150th celebrations this summer of the first lighting of Swallowtail or Swallow's Tail as it was originally called.
Next year should be bigger and better!
Posted by LDM at 1:06 PM No comments:

Tracks in the Snow

Not many people wander around at Swallowtail in the coldest part of the winter. Even on the calmest days, it can be quite windy. However, it is still alive with activity. I walked out to the lighthouse on Wednesday (Feb. 10) with a consultant who is developing a business plan for Swallowtail Keepers Society. It had been several days since it had snowed and much of the snow had disappeared in the current mild temperatures but in protected, shady areas there were still patches of snow. Despite the mild temperatures, the wind chill was such from the freshening northeast wind that ear muffs were welcome. Footing was good in the snow unlike last winter when the path was predominately ice covered. 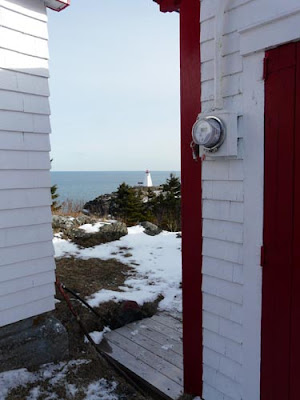 Swallowtail as seen from the top of the hill between the former Ross Island boat house and the pumphouse.
At the top of the hill there were numerous white-tailed deer tracks and those of a dog. Down the steps and past the footbridge, snow-shoe hare tracks criss-crossed the path, as did those of a red squirrel and probably meadow voles. A cat had also walked out along the path, perhaps one of the feral cats or possibly someone's pet. But ours were the first human tracks since the snowfall. 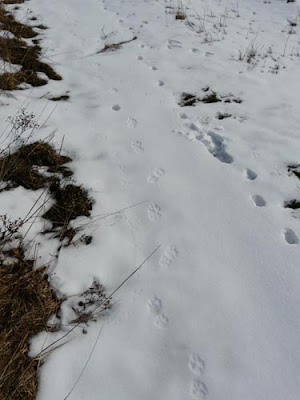 Meadow vole, cat and hare tracks (left to right) in the snow on the path to the lighthouse.
The consultant had been to Grand Manan many times but other than seeing Swallowtail light from the ferry, he had never actually walked out. He was so impressed with the peninsula and the amazing ocean views. The location of Swallowtail light is certainly unique, from first viewing the light after climbing the hill to look down upon it, the footbridge and long walk out to the light and then the tower itself with its unusual design with one less side at the top of the tower than at the base. There is something to see from one end to the other. 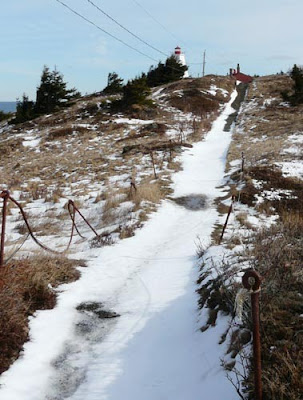 Snowy path on the way to the lighthouse.

Just in time for Valentine's Day, we are looking forward to a fun event on the weekend, a Chocolate Delight Tea that we organized as a fund-raiser for the 150th anniversary celebrations this summer of the first lighting of Swallowtail light.

There will be a fabulous chocolate buffet table from which everyone can choose their favourites, plus tea, coffee and, of course, hot chocolate. Inn at Whale Cove Cottages (www.WhaleCoveCottages.ca) is providing a door prize of dinner for two. We will also have a small jumble table of new and used items.

This is a prelude to a much bigger event next winter that will also have a chocolate theme, music, auction and generally fun.
Posted by LDM at 7:08 PM No comments: