During renovations of the keepers house, I have uncovered two signatures on the back of trim, one in the eastern kitchen and one in the eastern bathroom.  The former is from 1996 when renovations were underway to convert the keepers house to a bed and breakfast.  It was on a piece of trim around a pass through window from the kitchen to the dining room (former living room) in a new partition. The carpenter signed his work, not to be exposed again until it was torn off to return the original floor plan.  The latter signature dates from 1958 when the keepers house was being built.  Again it is on the back of window trim in the bathroom that had to be removed to take off the tub surround.

A stencil was discovered in the boat house from the assistant keeper, Addison Naves.  A bit difficult to see in yellow paint, it is on the wall beside the work bench.
In both coat closets in the keepers house there is what appears to be the combination for a lock or safe.  I do not know what this was for but it was obviously important to be written on the walls in both sides of the duplex for the keeper and assistant keeper.  Fortuantely neither closet had been painted so the original pencilled numbers remain. 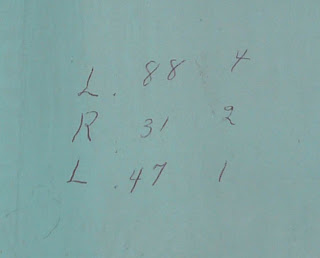 Tour of the light tower at Swallowtail

January 20 was an ordinary day in our renovation of the keepers buildings at Swallowtail until I heard the Coast Guard helicopter.  An inspection of the tower was underway and I grabbed my camera and headed over to the tower.  It isn't often the door unlocked these days and even when it is the tower is still off limits.  However, I was privileged to be able to follow Jamie who is responsible for the light towers in this area on his inspection.  A small sign on the inside door is a reminder of when the tower was open to the public and why it isn't any longer. 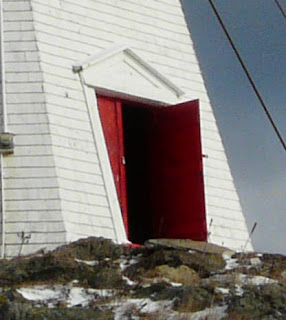 Upon entering the lighthouse, the first floor has been partitioned to house the diesel generator and fog detection equipment.  Until the light house was automated, this floor was unpartitioned.  There is the cage and ladder on the other side which was used to suspend a painter for painting the outside of the tower.  There is a door to the bell house and a set of stairs leading up to the second floor.  Reflecting back on a time when light houses were staffed by keepers and their family, there is a basket ball hoop on the wall wherea pick up game or practice could be done in the comfort of the tower.  The space is now limited but must have been a great place to play for the keepers' children.  There is some indication of water damage on one of the lathe and plaster walls and under the fog detection tubes but otherwise, entering the first floor is like stepping back in time.

Ascending the stairs to the second floor, I wanted to lean to one side because the walls slope in.  The second floor is wide open with a central post and lathe and painted plaster walls.  The outlines of the two former windows can be seen in opposite walls where they have been boarded up to protect the tower from water damage.  The windows were large and had 12 panes over 9 panes.  The path to the next set of stairs is painted on the floor.  There had been mercury contamination in the tower but the Coast Guard had remediated the problem by raising the air temperature to over 26.7 C (80 F) to vapourize the mercury in the building.  When the readings dropped to insignificant on meters which sensed mercury, the temperature was dropped back to ambient.  There is still some mercury trapped between the floor boards but there is no safety hazard unless the air temperature inside the tower is above the vapourization point of mercury.  Water damage in the ceiling where the plaster is hanging or has dropped to the floor is the only damage visible.

The third floor is painted white and the actual wooden structure of the tower is visible since there is no lathe and plaster on this level.  The stairs to the lantern dominate the third floor and light pours down from above.  Another window outline is visible.


The ascent to the lantern is through the middle of the tower.  The odd outside shape to the tower (octagon at the bottom, heptagon at the top) is explained by a landing that extends into this pie shape but the real reason is apparent in the lantern room because that is where the door opens out onto the roof and gives a bit more room to step out. The lantern is not the original lantern from 1860.  That was replaced in the 1960s with a smaller lantern.  The light has four bulbs, only one of which is operational at any one time. When one burns out, another rotates into position.  The windows were frosted because of the cold air temperature but a quick scrape gave an idea of the view.  It is not obvious from above where the water is coming in but the extreme weather at Swallowtail can confound any thoughts of how water might enter.


I didn't go into the bell house which is attached to the tower but it is in need of more repair.  The shingles on the roof have needed to be replaced for many years and the floor is apparently suffering from the water damage.  This little building needs work soon before extreme measures are required to save it as happened with the boat house when the southern wall collapsed.

At the end Jamie headed back to the waiting helicopter and I went back to painting windows.  All in all an exciting, although short visit and I thank Jamie from the Canadian Coast Guard for being so generous in letting me tour the tower, a wish I have had for many years.
Posted by LDM at 9:04 PM No comments: