It is unfortunate that a number of marine tragedies had to occur before lighthouses and fog horns were built around the Grand Manan archipelago. The treacherous ledges were the first to be protected with the building of Gannet Rock light and Machias Seal Island light in the 1830s. The wreck of the Lord Ashburton in 1857 in Whale Cove helped raise the priority of protecting the northern end of the archipelago. The construction of Swallowtail lighthouse and accompanying buildings began in the summer of 1859 with most of the work being completed by October. However, the lighthouse remained dark until the lantern was delivered from England the next year.

With the 150th anniversary of the first lighting of Swallowtail lighthouse this summer, Swallowtail Keepers Society has been gathering some of the historical information. From their family papers, Basil and Kaye Small gave me a copy of the sale of the right-of-way to Swallowtail light (Old Airport Road from Pettes Cove Road to Lighthouse Road and Lighthouse Road to the Saw Pit foot bridge) from James and Hadassa Small to the Canadian Government for $100, dated January 6, 1880. James had also formerly owned the “Swallow Tail” and had sold that for about $25 so the lighthouse could be built. It is a neat part of the lighthouse history but it also became more personal when I realized that one of the properties described in this paper was in all likelihood our own house. We had always wondered about the age of our house but the deed hadn’t been registered until 1930, which wasn’t unusual. Deeds were often signed when properties were sold and simply transferred without travelling to St. Andrews to have them registered.

We knew from the style and construction of our house with post and beam, hand forged nails, and wooden pegs that the house dated from the 1800s. The lumber used in our house came from many sources with some of the beams hand-hewn, others milled and others salvaged from other buildings and possibly ships. One wide plank (43cm or 17”) we uncovered had scorch marks on it but the marks did not make sense if the fire had occurred in this house. Most likely the lumber was salvaged from a building fire. Because of the numerous ship wrecks in the archipelago, timbers from ships were also a prized material and some of our beams have large iron spikes in them, possibly suggesting salvage from a ship.

So getting a piece of history about Swallowtail started me on a trail of discovery about the history of our own house. Armed with a name, John Dixon, I started looking at some of the censuses that are available online. The 1881 census had John and Elizabeth Dixon listed, as did the 1871 and 1861 and also later ones 1891, 1901, 1911, although there were variations in birth dates (remembering birth dates was not always precise) and spelling which often depended on the whim of the census taker asking people questions when not everyone could read or write. The data online has also been interpreted from handwritten documents that can be difficult to read. Neither John nor Elizabeth appear in the 1851 census for Grand Manan so working backwards from the 1861 census I made a number of assumptions including they were married on Grand Manan after 1851 and given that their oldest child was about 7 in 1861, that John and Elizabeth were married for about a year before her birth, that they built their house for their marriage and wasn’t built by someone else and people didn’t move very often then, our house could have been built as early as 1853 but probably not later than 1861 since the Dixon household was already existing as recorded in the census. Having only researched online so far, there are many other avenues that I can now explore such as the archives and church and cemetery records, for example, but it is a good beginning.

John & Elizabeth Dixon’s house, Circa 1900, as seen from the coastal foot trail to Swallowtail from Pettes Cove. 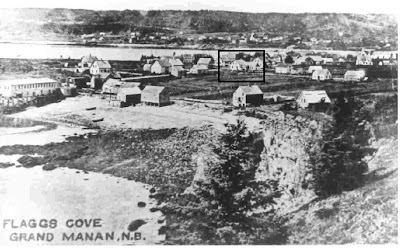 Now, assuming our house was built in the 1850s, the Dixon’s would have heard the talk about needing a lighthouse on the northern end of Grand Manan, particularly after experiencing the Lord Ashburton tragedy and its significant loss of life. John Dixon being a fisherman may well have gone to Whale Cove to help search for survivors. He also may have been the Captain Dixon who in 1872 towed the damaged schooner Tempo to Flagg’s Cove from Spruce Island at the Wolves where she went aground, as described in Eric Allaby’s 2001 description from the Grand Manan Historian XXV1, “Shipwrecks of Grand Manan”, although Peter Dixon also lived on Grand Manan at that time. The Dixon’s and, of course, others living in view of “Swallow Tail”, would have watched the construction of the Swallowtail lighthouse and lightkeepers buildings in 1859 and then saw the light glow in Pettes Cove at dusk on July 7, 1860 when it was lit for the first time, using porpoise oil for fuel. They would have also become familiar with the fog bell as it was tolled in response to approaching vessels. The construction of Swallowtail light changed not only the course of marine navigation but also the perception of a rocky peninsula, turning it into a strong symbol or icon of Grand Manan for all who travel to and from these shores.
Posted by LDM at 10:11 AM No comments: